How to Choose the Best Sunscreen - Verefina

How to Choose the Best Sunscreen 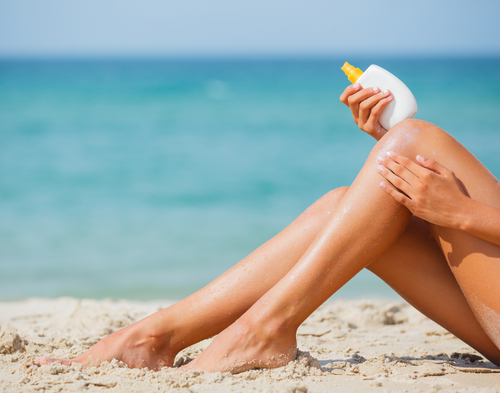 Sunscreen is an important tool for protecting the skin from the sun’s powerful rays. But finding one that is safe and effective can be surprisingly difficult and confusing, partly because there is disagreement about whether or not particular ingredients are safe. So I will try to provide an overview of some of the major concerns related to various sunscreen ingredients.

There are two basic types of active ingredients in sunscreens: chemical and physical. Chemical ingredients use synthetic chemical UV filters, while the term “physical ingredients” refers to mineral sun blocking ingredients, such as zinc oxide or titanium dioxide, which scatter and absorb ultraviolet radiation. As we will see, both have their pros and cons.

There are a number of concerns related to these types of sunscreens, including the following:

Some of the chemicals used in sunscreens are associated with skin irritation and/or allergic reactions. Oxybenzone, octinoxate, octocrylene, and avobenzone are known to have moderate to high rates of skin allergies (source).

Another common sunscreen ingredient, methylisothiazolinone (MI), is used as a preservative in various products and is known to be a skin sensitizer and allergen; serious cases of skin allergy have been linked to exposure to MI (source). The EWG notes that the use of MI in sunscreens is particularly concerning because sunscreens are applied over large areas of the body and must be reapplied throughout the day.

According to the Environmental Working Group, some laboratory studies of several sunscreen chemicals suggest that they may imitate hormones and disrupt the endocrine system (source). Some of them may also be toxic to the reproductive system. Animal studies have found lower sperm counts and sperm abnormalities after exposure to oxybenzone and octinoxate; octinoxate has also been associated with delayed puberty in animals (source). Another study showed that oxybenzone may interact with hormones when fed to animals in high amounts (source). Not everyone agrees, however, that this is a reason to avoid this chemical. According to at least one dermatologist, Darrell Rigel, MD, FAAD, the amount of oxybenzone that the animals (rats) were given in that study far exceeded levels that would ever be reached with normal sunscreen use (source).

When sunscreen is used in spray form, there is a question about whether or not adequate amounts of the sunscreen are even being applied. There is also a risk of inhaling it (source).

Physical sunscreens (also known as mineral sunscreens) use zinc oxide or titanium dioxide or both as their active ingredients. As I mentioned above, these ingredients work by scattering and absorbing ultraviolet radiation (source). Zinc oxide is an excellent sunblock and protects the skin from both UVA and UVB rays. Titanium dioxide is effective against UVB rays, but less so against UVA rays. That is why it is often used in combination with zinc oxide. These minerals also remain stable during exposure to sunlight. However, some concerns have been raised with certain forms of mineral ingredients.

This is a simply a cosmetic concern. Some mineral sunscreens make the skin look very white and pasty, a side effect that some people do not like.

In an effort to reduce the whitening effect of mineral sunscreens, some manufacturers use nanoparticles in their products. A nanoparticle is defined as “a particle smaller than 100 nanometers (nm), or 100 billionths of a meter” (source).

One concern that has been raised with nanoparticles is that their incredibly small size may allow them to be absorbed into the skin, the bloodstream, and, eventually, into cells and tissues (source). But it is not clear whether or not this is actually the case. The sunscreen producer Badger Balm, for example, states on their website that “science overwhelmingly shows that particles of zinc oxide greater than 30 nm, when applied to the skin in a lotion or cream based product, do not get absorbed into the body, do not enter the bloodstream, and are not a threat to human health” (source). (It should be noted that Badger used nanoparticles in their sunscreens until 2011. The company began using non-nanoparticles not because it felt that nanoparticles were unsafe, but because many of its customers asked Badger to stop using them.)

The EWG website also addresses nanoparticles, stating that “some studies indicate that nanoparticles can harm living cells and organs when administered in large doses. But a large number of research studies have produced no evidence that zinc oxide nanoparticles can cross the skin in significant amounts” (source). They also cite a 2010 study in which human volunteers applied zinc oxide sunscreen with particles of either 19 or 110 nm two times a day for five days. In both groups, researchers found less than .01 percent of the zinc in the bloodstream (source). The FDA and the European Union have also concluded that nanoparticles do not penetrate through the skin (source). It appears, then, that nanoparticles generally do not absorb into the skin. As with everything, though, there are exceptions. If the skin is broken, as is the case with eczema and other skin irritations, then nanoparticles might be allowed to the enter the body (source).

If you have eczema or broken skin, or if you just want to err on the side of caution, choose a sunscreen that is specifically labeled as non-nano. Be aware, however, that because of the difficulty in measuring all particles in a product, it is nearly impossible for manufacturers to guarantee that 100 percent of their zinc oxide or titanium dioxide is non-nano (source). The term non-nano is also defined differently in different regions of the world and by different regulatory agencies (source).

Another concern with mineral sunscreens is the risk of inhaling small particles of zinc oxide or titanium dioxide. Inhalation does not appear to be a risk with sunscreen lotions, but it is a problem when it comes to mineral sunscreens in spray form (source). The issue is that the lungs have difficulty clearing small particles, so they can pass into the bloodstream and may cause extensive organ damage (source). For this reason, the EWG strongly discourages the use of such sunscreens.

Other Ways to Protect Your Skin

Sunscreen is of course only one option for protecting the skin. Avoiding direct sunlight during the middle of the day (from 10 a.m. to 2 p.m.) and wearing protective clothing, such as hats, long pants, and long sleeves, are also important.

Applying antioxidants to the skin topically is another important tool for preventing long-term damage to the skin. Exposure to ultraviolet light triggers the development of free radicals (unstable molecules) in the skin. Antioxidants can neutralize free radicals and protect skin from the damage they cause. For this reason, many sunscreen manufacturers add antioxidants and antioxidant-containing ingredients to their products. Such ingredients include vitamin E, sea buckthorn oil or extract, and pomegranate oil or extract, to name a few. To learn more about topical antioxidants, see this post on how antioxidants help protect the skin from sun damage.

Certain plant oils and essential oils can provide mild protection from the sun as well. A 2010 study of various oils found that coconut and olive oils have an in vitro SPF of 7.1 and 7.5, respectively; peppermint and lavender essential oils have in vitro SPFs of 6.6 and 5.6, respectively. The authors of the study noted that the “study will be helpful in the selection of oils and fragrances to develop sunscreens with better safety and high SPF. Oily vehicles are more effective for producing a uniform and long-lasting film of sunscreen on the skin, and their emollient properties protect the skin against the drying effects of exposure to wind and sun” (source). We use coconut oil in our Coconut Hand Lotion and olive oil in our Olive Oil Lotion.

As you can see, choosing a safe sunscreen can be overwhelming; there are so many variables to consider! I personally opt for using mineral sunscreens when I am going to be in the sun for more than about 30 minutes. I avoid chemical sunscreens because of the concerns listed above, the one about hormone disruption in particular. While oxybenzone may only affect hormone function when used in high amounts, I would rather not take a chance. And I avoid chemical sunscreens for another reason: we don’t really know how the chemicals in sunscreens interact with each other or with the chemicals found in other personal care products.

I have noted that mineral sunscreens are not necessarily perfect, either. However, after having studied and revisited the issue over the course of several years, I believe that, in lotion form, they are the safest option. Based on the information that we currently have, I believe that zinc oxide and titanium dioxide particles (even if they are nano) are very minimally absorbed by the skin and that they are safe and effective sunscreens. It is my opinion that the biggest risk from mineral sunscreens is inhalation, which is why spray forms should be avoided.

In combination, mineral sunscreens, adequate clothing, and skin care products with topical antioxidants can protect your skin from the sun and the long-term damage it can cause.

“The Trouble with Oxybenzone and Other Sunscreen Chemicals.” Environmental Working Group. Web. 10 June 2016.

Too Much Sun? Heal Sunburned Skin with After-Sun Mist

How to Use Phototoxic Essential Oils Safely